Post-its to give for Thank you's. 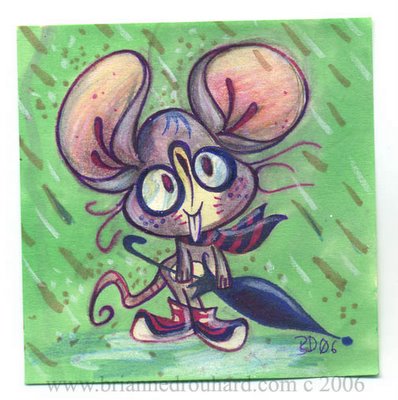 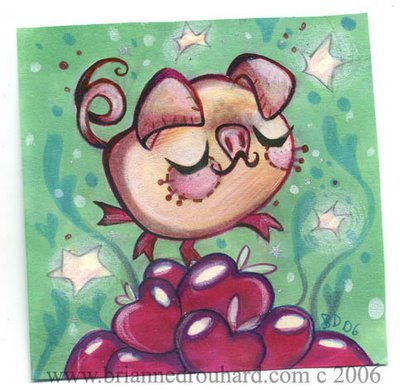 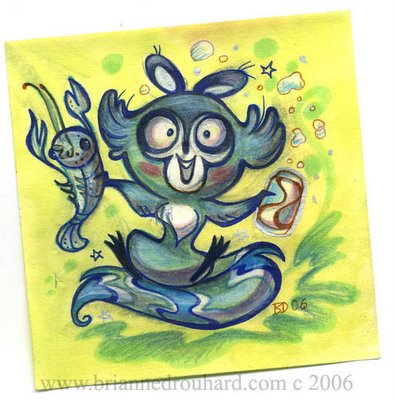 Miss Mindy blogs away!
Some videos my brother sent me. May not be work safe. Click on the photos to the left. The one at the bottom is particularly disturbing. Go here.
Email ThisBlogThis!Share to TwitterShare to FacebookShare to Pinterest
Posted by PotatoFarmGirl at 1:21 AM 11 Taters

NO CUTE FOR YOU TODAY!!! 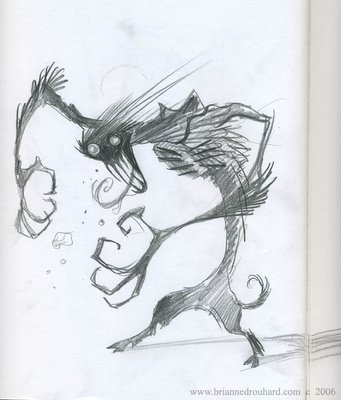 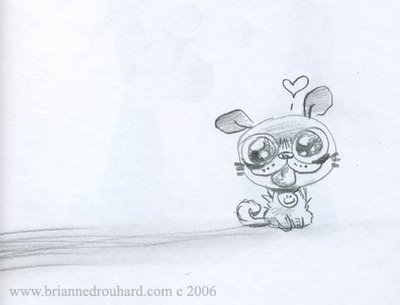 Oops! A puppy. Oh well....
Jon Suzuki has alot of blogs. Mallah kiks ass!!
Email ThisBlogThis!Share to TwitterShare to FacebookShare to Pinterest
Posted by PotatoFarmGirl at 12:19 AM 7 Taters

I want to post more drawings, but that may have to wait a bit. But here are some art shows I wanted to post before I forgot, so people could actually go if they wanted too. I want to go to both, but they are going on at the same time. RRrrrghhh!!! Stoopid LA.
First, Elizabeth Ito is having a show at Storyopolis on Ventura Blvd. this Saturday. It will contain her monsters, including Mr. Monster. There will be other artists showing there as well, Chris Robertson and Dan Santat. It's a childrens' book gallery/store, and the artists showing will sure have some neat stuff.

The other show is at Robokon in China Town Saturday night also. The artist is Mizna Wada. She will have some tricked out dolls, posters, and clothing, with a taste for the macabe at her show. Chu-hui gave me an awesome stationary book with her illustrations it, they are creepy good. It's her first show in the US, sounds koo... 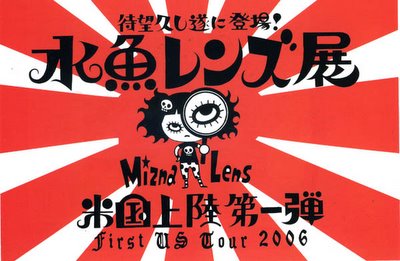 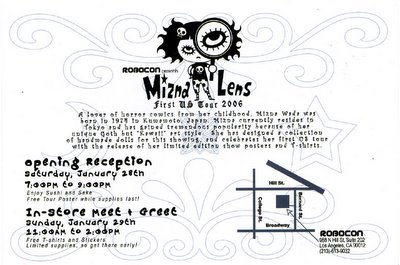 Aaaahh!! There are so many blogs!! David Colman crazy animal artist and more! An old college classmate who draws cute little kids and animates like a crazy man, Chris Chua. Monica, a CSSSA friend from long ago, who has natural animation talent, and a cute bouncing baby boy!
Email ThisBlogThis!Share to TwitterShare to FacebookShare to Pinterest
Posted by PotatoFarmGirl at 12:03 AM 6 Taters

Somewhere, in Sherman Oaks, a board artist is missing their white post-its 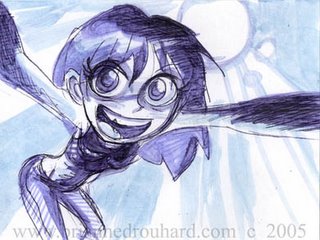 Skippy is running around tearing up the carpet and banging his face into the bedroom window. Not a good thing 'cause I live on the third floor. If I don't go to bed soon, Skippy is going to be reinacting some action movie where someone crashes through a window. Except he won't have a machine gun and there won't be a massive explosion behind him. This must mean it's time for bed. Hasta manana, baby.
Go here for fun. Idiot style
Email ThisBlogThis!Share to TwitterShare to FacebookShare to Pinterest
Posted by PotatoFarmGirl at 12:47 AM 11 Taters

Just finished doing a boat load of freelance (there are some tweaks left to do), and this should be my last weekend of unemployment for awhile (fingers crossed). I am supposed to start a new job Monday, but have been doing freelance for zat place the last few weeks. When I was in there last Monday, the tv in the lobby was playing the premiere of the last episode of Teen Titans, called "Things Change". Which they do, things are never placid, so people have to be flexible. I really enjoyed working at my last job and feel very fortunate to have been a part of that, but now I must venture into new and exciting waters. The new place has friendly faces, so it will be good. So here be a few sketches unrelated to work. 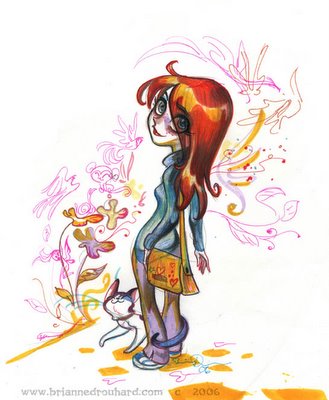 Uhhhhhhhhhh.......some mucky stuff going on up in here, should probably try working with some better light. 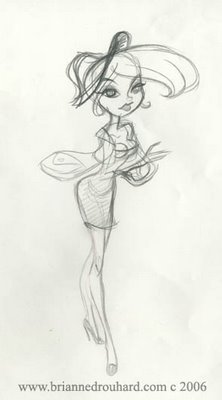 I was watching some movies while I was working on freelance. I was watching/listening "Down with Love", it's pretty cheesy, but some of the costumes were cool. 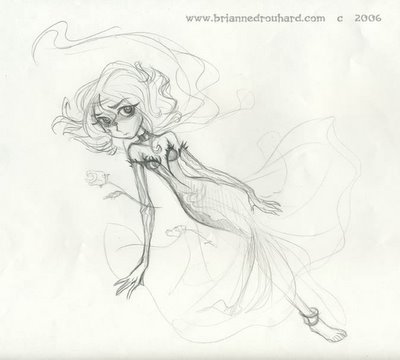 I was also watching "Princess Tutu". Don't laugh, the story is really good, and pulls alot from classical music, ballet, and fairy tales. It's shojo, so I don't know if I'd recommend it to guys, but it starts getting dark around the sixth episode or so. I watched "The Point" this weekend too, I am happy it is on dvd finally.
Also, thanks John Nevarez for the plug, and links to many awe-inspiring blogs and websites!! :D
Email ThisBlogThis!Share to TwitterShare to FacebookShare to Pinterest
Posted by PotatoFarmGirl at 9:59 PM 14 Taters 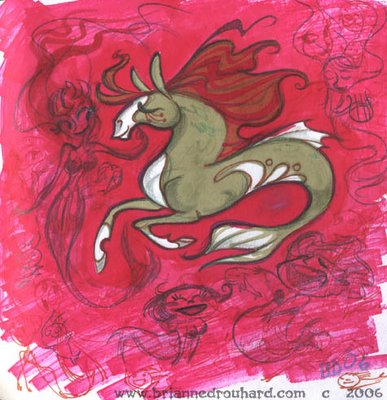 Sleepy........... want to start new job soon........... I am drawing lots of things that are fun and will pay for groceries and chocolate.......and tea. :D I need chocolate chip scone. So GoooooooooooooooooDDDDDD.... Skippy says "Hi". He has adopted a hair band today. He's been carrying it around, throwing it in the air, and licking it. He does not have a kitty brain, he may have no brain at all. We are not much different. Oh look up above. It's a horsey, swimming in Kool-aid. Ick.
Email ThisBlogThis!Share to TwitterShare to FacebookShare to Pinterest
Posted by PotatoFarmGirl at 11:38 PM 4 Taters

What happens when a Smurf pees in the ocean.... 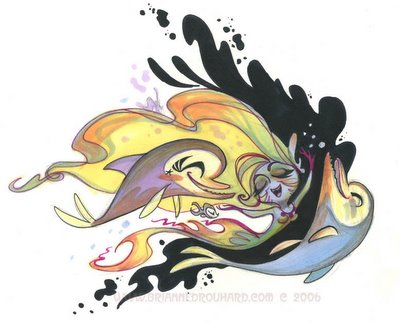 Here are some linky links for looky loos......
YOUNGBERG!!!! He draws good storyboards and stuff.
This is a funny video, but has some super offensive crude language so probably not work safe. Worst job in the world.

I don't wanna make a new post for this. Rainbow Brite and her freaky forehead. Just wondering, has anyone ever noticed that Fuzzy Lumpkins from PPG looks like Lurky and the Star Sprites? Tis funny.

Email ThisBlogThis!Share to TwitterShare to FacebookShare to Pinterest
Posted by PotatoFarmGirl at 9:58 PM 16 Taters 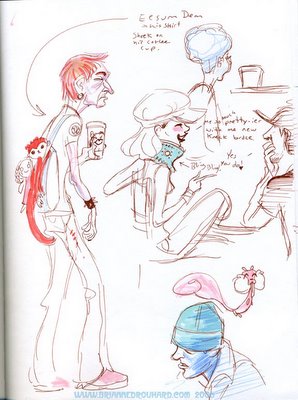 I walked to the dentist today. My teeth are healthy, which is the most important thing in the world and the entire internet should know, BUT, they said I drink to much tea. So I walked to Starbucks afterward and ordered some tea. Ha Ha!! Stupid teeth...... There were alot of funny people there. I am usually afraid to draw them 'cause that gives them a reason to talk to me. There was an old man there, maybe 70's dressed really punk, carrying a doll and monkey, with these odd words on the back of his shirt. He was also carrying a shrek coffee mug. There was also a lady there in a powder blue neck brace, who had some fun with a bedazzler. Mad props to them. 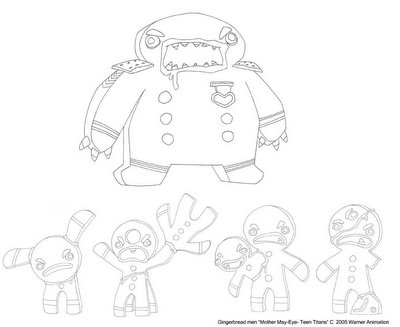 Here are some evil gingerbread men. Ireneo designed the gingerbread men before they were turned into hideous monsters. I like the one that has a body for a hand. He can lay on the hurt!!
Email ThisBlogThis!Share to TwitterShare to FacebookShare to Pinterest
Posted by PotatoFarmGirl at 10:46 AM 8 Taters 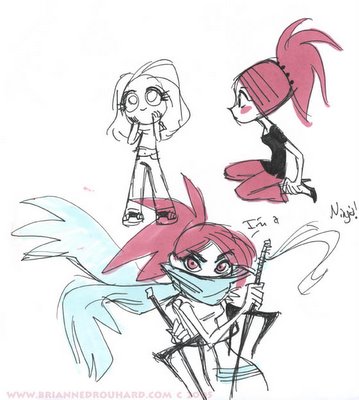 It's a ninja.
Email ThisBlogThis!Share to TwitterShare to FacebookShare to Pinterest
Posted by PotatoFarmGirl at 5:06 PM 5 Taters 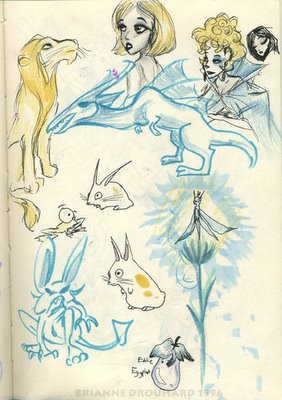 New year!!! Every budday! Every budday!! So here is a 10 yr old drawing from the first sketchbook I ever kept and finished. It's from xmas 95'-March 96' Like a lot of people who like to draw, I'd been drawing since I could hold a pencil, (or keep me from running around and having asthma attacks) but I didn't start keeping a lot of them in book form until sophomore year in highschool. It does help being able to look back and see how much was learned and how much there is left to learn. Sketchbooks are great, they are like little file organizers for your brain, and would probably be beneficial to any artist who kept one, which a lot do!
So I officially feel old this year! Yay!!! Summer 1996 I went to a thing called California State Summer School for the Arts (CSSSA, renamed recently to Innerspark). They take out of state students also, so that was why I was able to go. At the time, the teachers there for animation were Christine Panushka (who now teaches at USC, sweet, inspirational gal!), Gary Shwartz, Ruth Hayes, Corny Cole, and Leo Hobaica. It was a neat program where young aspiring artists could meet other young aspiring artists from around the country, take crash courses in animation, including it's history and many forms, tour studios and meet professionals, guest speakers, and meet artists of different discipline. Art college was a bit different, we had so much work to do, it was hard to mingle with students in different programs. I'm still friends with many of the people I met there. Some are married with cute little babies, others have found different careers that float their boat, and some have blogs too. So 1996 was a cool year for highschool students who had been bored out of their mind knowing what they wanted to do, and finally knowing what needed to be done to get there. And it'll never be done, there are so many cool things to see or do. Yup. Down below is a schedule from the first week of CSSSA 97' (I went for one more summer). They had us go to a screening of Renee Laloux's films "Fantastic Planet" and one about some space time travelers. He was there and told us the difficulties of getting the movies made. I don't remember going to the Leonard Nemoy thing, sadly, I was probably WORKING on an assignment or something. Other than CSSSA, 1996 was spent drawing, jogging, and playing Chrono Trigger and Final Fantasy 3. Sweet. 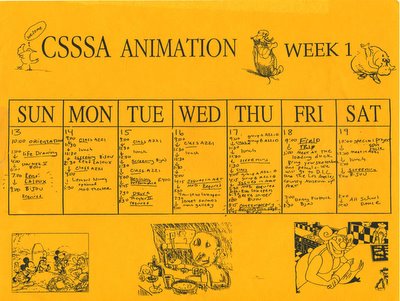 Email ThisBlogThis!Share to TwitterShare to FacebookShare to Pinterest
Posted by PotatoFarmGirl at 6:07 AM 5 Taters