Busy with stuff, but seen some neat videos online that are pretty inspiring!

The first one was found on Matt Youngberg's blog, and he actually has a post that goes into a bit more detail about this video. Matt always seems to find the neatest stuff. Go here to read info about it.
Yui Aragaki - Piece
by Total_Manga

Cencoroll
The following was apparently animated by mostly one person, Atsuya Uki. It is a trailer for a feature that will be coming out later this year.


Wolf and Pig.
A guy uses photos and his environment to make a funny animated video. There is also a pig.


Beaver welcomes drivers to Canada.
Do not worry, he will be ok.


Röyksopp 'Happy Up Here' . I'm always late to the party, this song and video is really neato.

k'bye for now.
Email ThisBlogThis!Share to TwitterShare to FacebookShare to Pinterest
Posted by PotatoFarmGirl at 2:48 AM 4 Taters

I got the chance to make some artwork for a Street Fighter Tribute Show! There will obviously be lots of neat nerdy art at the show. There will also be a SF 4 game tournament there, so you can pretend you are punching people.


I drew lots of Ibuki, 'cause ninjas are always fun to draw. She is finishing a training assignment, she must find at least one red panda. It is her quest, "Hunt for Red Panda." 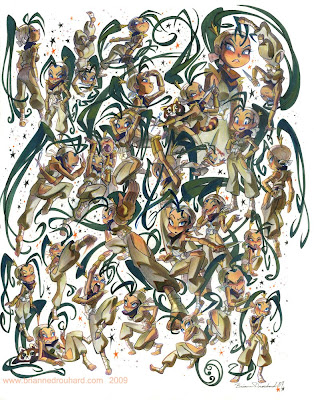 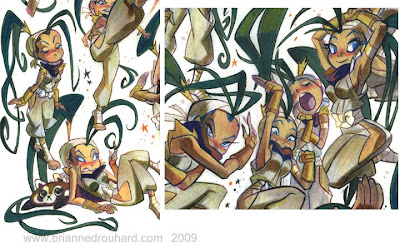 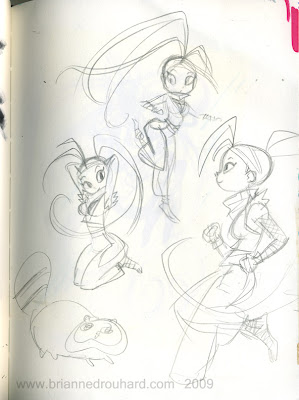 Super sleepy, going to bed.
Email ThisBlogThis!Share to TwitterShare to FacebookShare to Pinterest
Posted by PotatoFarmGirl at 1:15 AM 17 Taters

Why is this April Fool's? Because it was drawn by a fool! 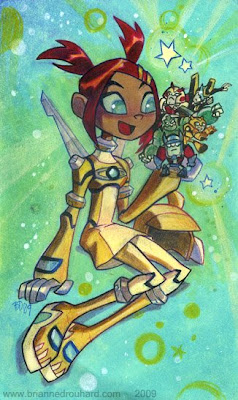 I did not design Sari! Derrick Wyatt did! I got a few emails the past week for requests for Sari, since some people actually like her. Hey I do too! I'll wave my dork flag proudly, whatever. As far as drawing her, I've never drawn this version of her, ughhhhh....... Sari is owned by Hasbro, even though they will probably never make a toy of her or use her for fruit snacks.

Hey! It's Glyph! Derrick told me to put her up here. She was colored by Claire Lenth, who also does fabulous drawings! Bother her so she will actually post them!

These sketches were made while I was unemployed for five billion years. During that time Claire was also unemployed for a bit, so we would go hang out in this wonderful magic kingdom above an Anthropologie store, drinking tea along with Pinkberry yogurt. There was also much manga reading, and many copic and tria markers. 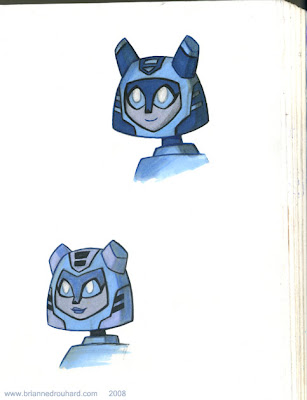 I drew some stuff that wasn't Transformers related then also. That is for another time. Oh! Skippy has a fan page too. Now he is much chubbier.


Glasses Bunny stares into your soul, he knows how you really feel.

Figured this out from Tom Perkins. Did you know you can embed graffiti from Facebook? I didn't cause I'm dumb. This is from a month ago. When I was inbetween jobs. ;)

On a random note, I just found out my cousin has a bike named "Megatron". I think it's supposed to be named after her sister "Megan". They're both in college.
Email ThisBlogThis!Share to TwitterShare to FacebookShare to Pinterest
Posted by PotatoFarmGirl at 1:30 AM 24 Taters