Halloween time, if you run into someone like this, run as fast as you can in the opposite direction! 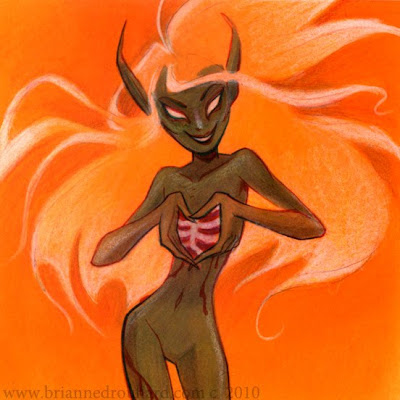 This is particularly horrifying!

Email ThisBlogThis!Share to TwitterShare to FacebookShare to Pinterest
Posted by PotatoFarmGirl at 7:57 PM 5 Taters 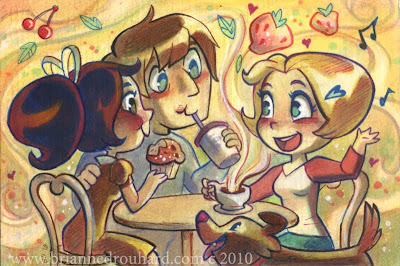 Ugh so sleepy, brains mushy. Time to go pass out. Bye!
Email ThisBlogThis!Share to TwitterShare to FacebookShare to Pinterest
Posted by PotatoFarmGirl at 7:38 PM 6 Taters

This week's Poop brought to you by the letter Pee.

I drew a girl on a post-it looking annoyed. What else is new? 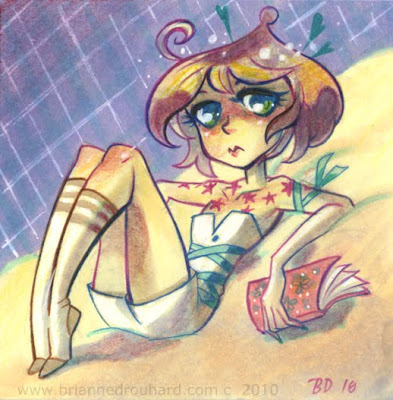 Cartoon Network has started airing new episodes of "Batman, the Brave and the Bold" on Friday nights. I got to board on some of those.
Disney XD is going to start airing "Avengers" October 20th. I started on episode 18 and on, drawing some characters. Lots of people running around in their underwear. And who doesn't love underwear?

If you do like super heroes, aliens, and other odd critters, please check out my friend's app! He is drawing many Avengers for you, please contribute to his coffee and Subway sandwich fund! Thomas Perkins: A Collection of Odd Folk!!
Email ThisBlogThis!Share to TwitterShare to FacebookShare to Pinterest
Posted by PotatoFarmGirl at 10:07 PM 4 Taters

Gesukapper on my twitter feed posted this lovely student film from Taiwan. I love it so much! This is wonderful!

Info with the video:
"This is a graduation Production made by three students graduated from the National Taiwan University of Arts.

The main character of little girl in the story confronts a robbery and strays from the road she is familiar with. After passing a hedge, she enters an unknown world and unfolds a magical adventure depending on senses other than vision and her imagination. With soft and cute colors as the main key, we used simple designs to depict the little girls' imaginary world.

Just a quick link, click the little girl at the bottom of the page to view their production progress! Paper and pencils! http://nccu.edu.tw/95306074/oos/making.html
Email ThisBlogThis!Share to TwitterShare to FacebookShare to Pinterest
Posted by PotatoFarmGirl at 3:48 AM 5 Taters