August 7th at 12pm, I'll be signing and reading Billie at Kidspace in Pasadena, for Friendship Day!
If you have little ones, please stop by!
Kidspace 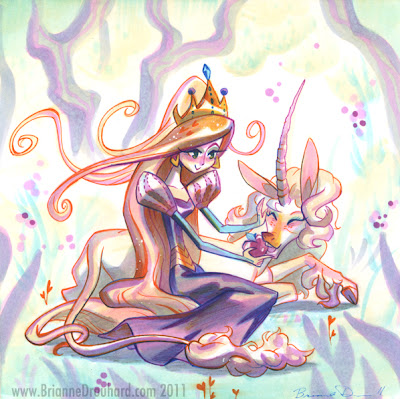 I was given a copy of Sketchbook Pro Copic Edition at Comic Con.  I don't draw digitally often, so I still prefer good ol' marker on paper, but I'm still going to play with this program.  When I have more time. 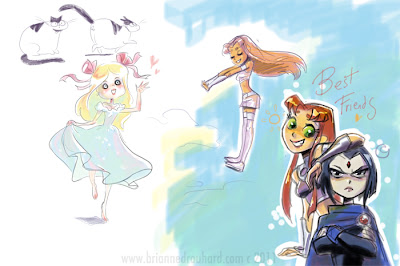 Email ThisBlogThis!Share to TwitterShare to FacebookShare to Pinterest
Posted by PotatoFarmGirl at 6:50 PM 2 Taters 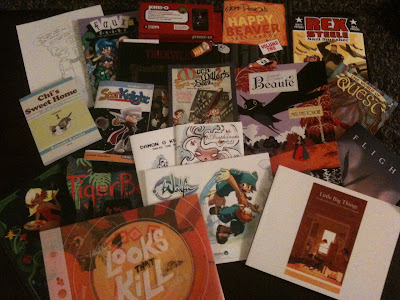 Comic Con 2011 was exciting.  It was great being able to meet up with friends, the yearly San Diego summer break for nerds are always a chance to see old friends.  I still missed a lot of people, the floor is just too big, and with other events happening in the city I wish I could just clone myself.

I picked up a ton of beautiful new books, along with meeting new people, and new opportunities.
Thank you to all who took the time to visit our panels and stopped by for the signing Sunday.  The children's book panel on Saturday was full, and I hope it was helpful to those who came.  Making a book and project of your own can be a daunting task, but it's a wonderful feeling to have a completed little collection sitting in your hands.  Good luck to those who attempt the journey!

On Sunday I was signing at Tr!ckster, and was very happy to trade art with many talented people who came by.  I have to really thank the kind people that were running the pop up store.  I'm so very grateful to have had the chance to sign books and meet people from around the country and the world.  I had the lucky chance to meet an animator and artist I truly admire.

Now onto some old art that I showed at Saturday's panel.  Sorry I was a mumbling mess, I was really nervous.  Luckily everyone else had their game together!  Major thanks to Mike Collins, Eric Haeger, Eric Gonzales, Beth Sleven, and Steph Laberis!  Go bother them if you want to see what they presented.

Billie grew out of my 4th year film from college, in 2002.  The year I graduated wasn't a great time for 2D feature animation.  I was fully aware I'd probably never get to animate professionally, but not sure which path I should take once school was over.  I tried my best to learn all I could, and attempted to go into illustration.  I also had no idea on how to prepare a portfolio for TV animation, or even what type of jobs were available. Worrying about all these things was physically exhausting and I was burnt out before I graduated.  "Ooney Corn" suffers from severe Senioritis. 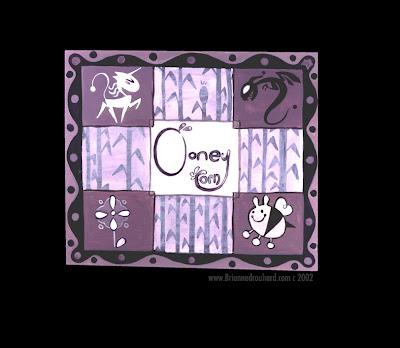 These crude scribblings were from 2001, first semester, when I was planning and trying to figure out what I wanted to make for my last film of my college life. 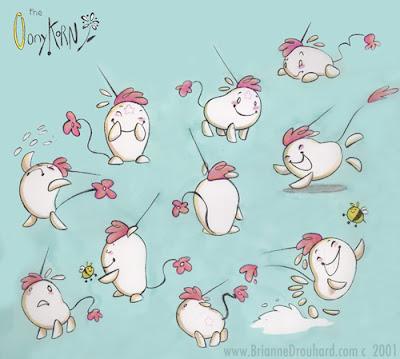 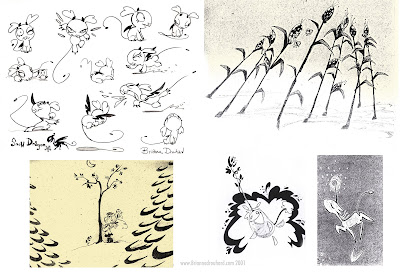 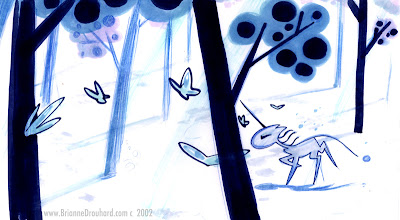 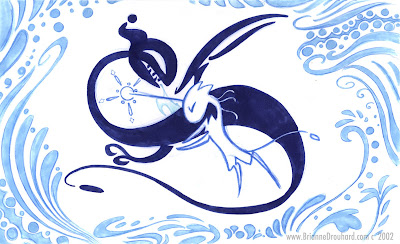 After graduating, I was one of a lucky few who found a job.  It was at a 3rd party video game company.  I think I acquired an ulcer there, it was extremely stressful. After nine months, they laid off most of their animators.  I didn't have any family or friends close by, and was feeling pretty lonely. So I decided to dump all my new free time into figuring out what my senior film should have been.  Felt it would be the best to make something positive of the situation. 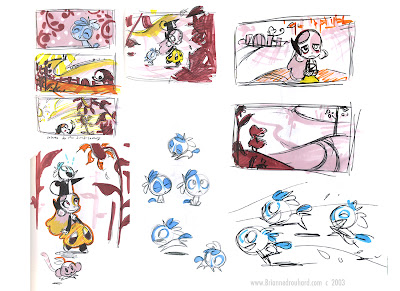 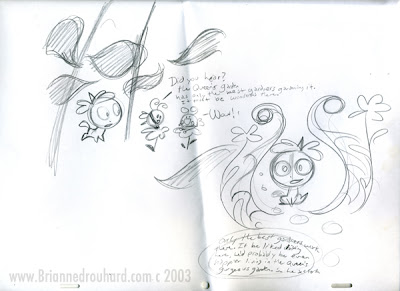 In 2004 I was fortunate and found a job on "Teen Titans".  My coworkers at the time suggested I put  sketchbooks together for Comic Con.  Stuart Ng Books was nice enough to carry "Banana Cat", and Immedium contacted me if I'd like to make a children's book. I had an idea for a Scarecrow Princess, but I couldn't get the story to work.  It felt really forced to me. 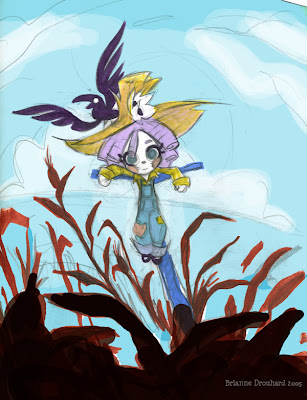 About the time I figured out that I couldn't draw that story for 36 pages, I drew some unicorns for "The Unicorn Show" at Gallery Nucleus in 2006.  They were too much fun too draw, and they merged into all the drawings I had made after school.
I wanted to make a book for my family and friends who'd stuck with me for so long, and I also wanted it to be for anyone who loves unicorns.  Young and old. 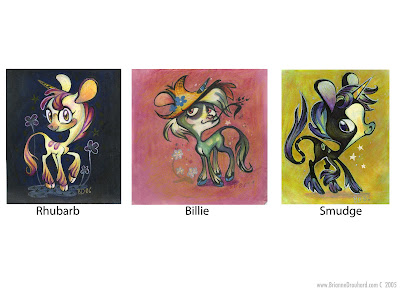 I made thumbnails and a script to pitch to my publisher.  These aren't part of the final pitch, just thumbnails. 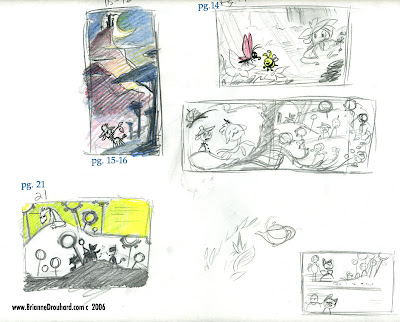 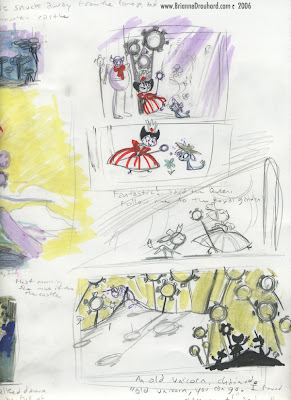 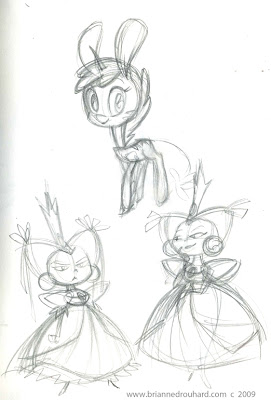 I stopped working on it when I was unemployed 2008-2009.  Taking tests to find a paying job was eating up most of my time, and I also tried pitching to the Cartoonstitute.  I actually made a full animatic with music from The OneUps.  Even though I didn't get that final approval, it forced me to try story boards again, and it was enough to help get storyboard freelance.  Michael Chang was nice enough to let me try storyboarding on "Batman: Brave and the Bold".  Once I was working and learning new tricks, I redrew the layouts on Billie.  I had about four pages fully markered, but had to push the book back another year.  I was in two of my close friends weddings, and Batman was a high maintenance guy.  My publisher was very understanding and rescheduled my book. 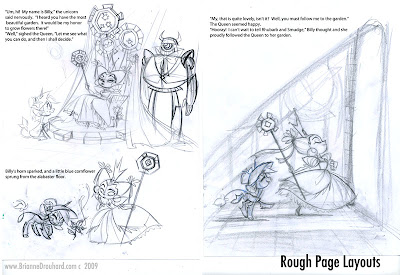 These are all the colors I used just for Billie. I had a set of colors for each character figured out to keep them consistent.  I tried anyway.  XP 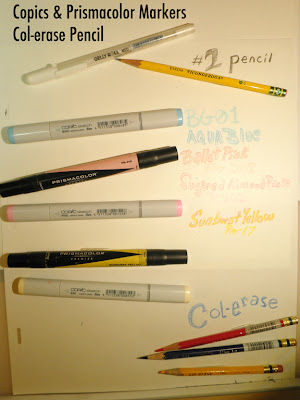 Not sure if I touched on any of this during the panel.  I blocked out what happened -_-.  I was also going to show a WIP trailer I had been working on for Billie.  The trailer was put aside last spring when some interesting events happened at my job.  It's all very good news, I'm just going to extremely busy these next few months.  Happiness!!!

In the meantime, here's the trailer I hope to get back to some day.  I drew the boards quickly in photoshop,  edited them together in premiere, and used the movie file as a guide.  The scenes that are animated are still rough.  I used the paint brush in flash, a rough pass, and a clean up pass.  I want to try coloring it in photoshop, but it's time consuming.  Maybe someday.
The music is WIP by Mustin and Kunal Majmudar of The OneUps and The Bad Dudes.  Please visit them and tell them you love them!!!!

Email ThisBlogThis!Share to TwitterShare to FacebookShare to Pinterest
Posted by PotatoFarmGirl at 1:56 AM 9 Taters 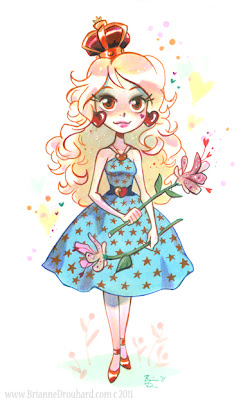 I will be there, having fun with friends.  I'll be updating this post with any new info between now and then.  :)

Saturday, July 25
4:00-5:00   How to Create a Children's Book— Brianne Drouhard (Billie the Unicorn), Mike Collins (Monster Mythos), Erich Haeger (Rosita Y Conchita), Beth Sleven(Cryptid Case Files), and Steph Laberis (Ghost Chef) discuss the process of creating a children's book from scratch. Topics include designing a character and its world, choosing illustration materials, and creating a story. The panel participants have backgrounds in animation and gaming and will discuss how this influences their art. Development art will be presented, followed by Q&A. Room 30CDE


Sunday, July 24
1:00-2:00   The New Wave of Children's Books — Artists/creators Attaboy (You Might Be a Monster & Other Stories...), James Kochalka (Johnny Boo), Ragnar (Got Your Nose), Rhode Montijo (Cloud Boy), and Brianne Drouhard (Billie the Unicorn) discuss the exciting new wave of innovative books for kids (and the rest of us!).  Moderated by Bob Self (Baby Tatto Books).  Room 24ABC

Tr!ckster will be held across the street from Comic Con at the San Diego Wine and Culinary Center, 200 Harbor Drive, Suite 120.
I'm planning on hanging around there Friday at 3pm, and Saturday afternoon before the panel, for  anyone who would like a signed book.  Tr!ckster will have Billie available in their pop up store during the convention.  I'm very thankful they are willing to carry it and to let me sign!  Also really excited to be on a panel with some good friends!

Check my Twitter feed during the convention in case of any last minute changes.

The "Girls Drawing Girls IV:  The Way Nature Made Her" will be available at their booth, #5628, and I had a lucky chance to draw a page for that.  Looks like it'll be a beautiful book! 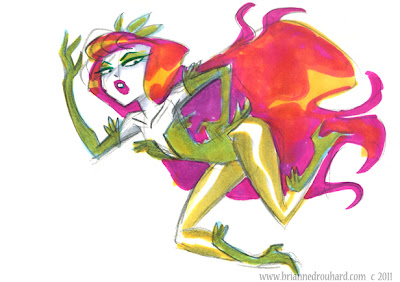 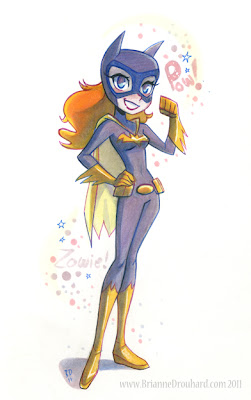 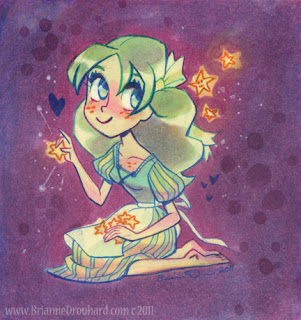 Thanks to everyone who came out to our panel at Anime Expo last weekend!  I also met a nice lass named Katie who beat me at Rock, Paper, Scissors.  She won the gift bag at the panel!
(and I totally saw people in the audience trying to cheat!  HA HA!! XD )

Email ThisBlogThis!Share to TwitterShare to FacebookShare to Pinterest
Posted by PotatoFarmGirl at 12:17 AM 7 Taters