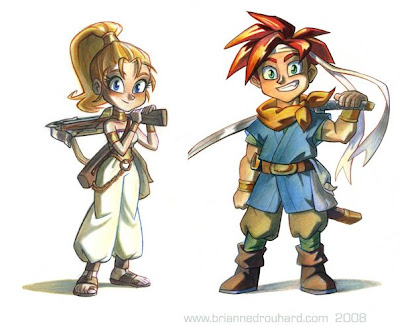 I was going to wait until after Comic Con to post this, but pre-orders for Chronotorious started yesterday. There will only be a run of 1000, and I guess over 150 orders have been taken already, so here is an early heads up. What is it?

Here is the info from www.baddudesmusic.com
"15 Delicous Chrono Trigger tracks have been arranged for you. But only if you buy the cd album. When the cd is goin, it's gone forever, along with 5 of the tracks. There will be an iTunes/AmazonMP3 release, but it will only feature 10 tracks, won't include the poster and you'll find yourself scouring ebay for a legit copy. Don't be a jerk-get the CD before all 1,000 are gone."

So if you don't get the CD, I won't think you're a jerk. BUT, there is artwork inside the cd case, which I made. I won't post the finished marker illustration, 'cause that would be kinda jerky for the people who do decide to shell out money for it, but I will post the rough drawing so people can know what to expect. Also, I did an illustration for the back of the poster, that Steph Laberis made with her masterful computer skills. Maximo Lorenzo also did some really awesome artwork for the CD face! Oh yeah, and the hard copy CD is $10!
Thanks to Mustin for letting me be a part of this project. If you don't know what Chrono Trigger is, google it! 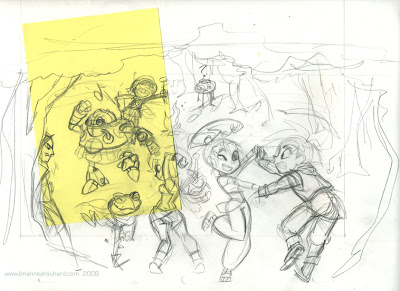 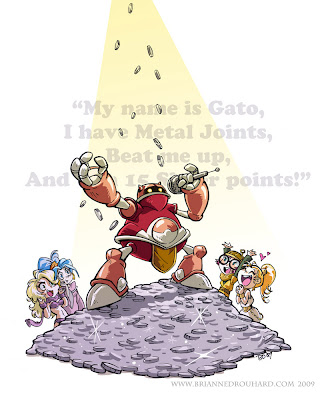 I have more unused Chrono Trigger art, but that will be posted another time. The next week is going to be insane for me. Sorry! Apologies to Toriyama also, Chrono Trigger introduced me to his art, NOT Dragon Ball Z 9000000000.

Email ThisBlogThis!Share to TwitterShare to FacebookShare to Pinterest
Posted by PotatoFarmGirl at 12:16 PM 22 Taters

Here are some ponies I drew back in 2006 for whatever reason. It is hard to make them not look like Miss Piggy. :( 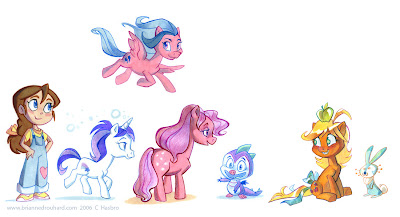 I had baby Glory. She was stolen when I brought her to school in the 1st grade. At the time she was my favorite pony, and I found out later that my college friends also have stories about how they lost the same pony too. One lost her in a fire, and one was given away without her consent. Glory is a fated pony. 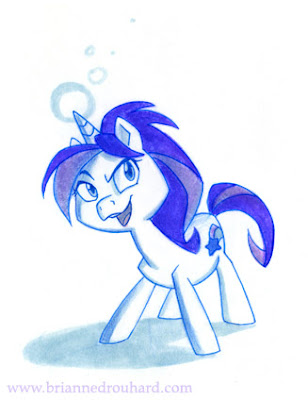 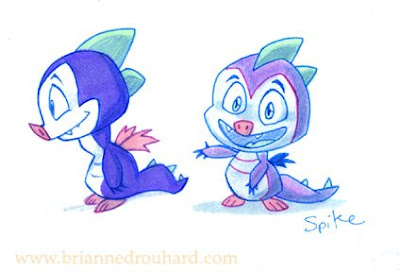 I did these yesterday, looking at the old drawings made me want to make more. Sorry the digital one is really weird. 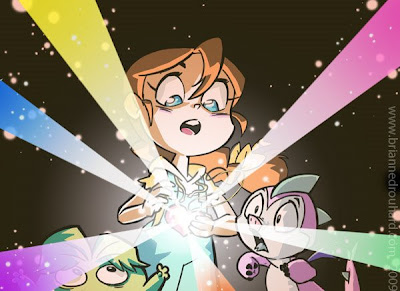 I still have Applejack, Firefly, and Spike. They are hanging out in my bedroom/office/pit of mess. 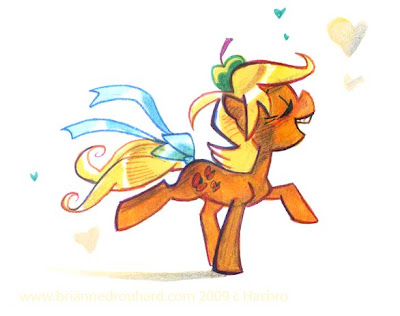 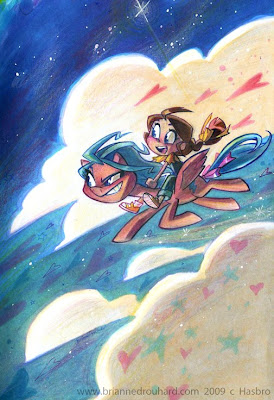 Found some really awesome videos in the past month! Youtube is being weird and not letting me make a playlist, so here they are separately. Maybe I can fix it later.
The first one is really cool, but my friends think it is really annoying. It's from beatmania IIDX, a rhythm game that you play with your hands. They usually have music videos that play during the level, though they usually aren't fully animated like this. The animation on this is just really well done, the delayed eye blink, the squishy stylized tutus, gahhhh!!!
beatmania IIDX - smooooch・∀・

This is a music video by the band SOUR. They got their fans from around the world to help make it. The song is beautiful, and it's pretty dumbfounding how this was edited together. Check out the rest of the videos on this person's youtube page. They made other equally inspiring videos for SOUR. Like this one. Also this one too!
SOUR '日々の音色 (Hibi no neiro)'

This video uses the tilt-shift technique. Everything in this video is real, no models were used. The edges of the lens is blurred to make objects appear smaller than they are. This song is also really good!
Tilt-Shift: Bathtub IV: Clementine - Washington

Here is the Smooch video one last time. It's so popular, fans are animating on top of it with their favorite characters. Here is the Dissidia version. Hee.

Thanks for all the recent birthday wishes! It was a super fun day, had a burger and some chocolate shake with beer in it at a haunted restaurant, then went and saw early experimental Jim Henson films! Jim Henson was crazy. Crazy good!
Email ThisBlogThis!Share to TwitterShare to FacebookShare to Pinterest
Posted by PotatoFarmGirl at 12:26 AM 22 Taters 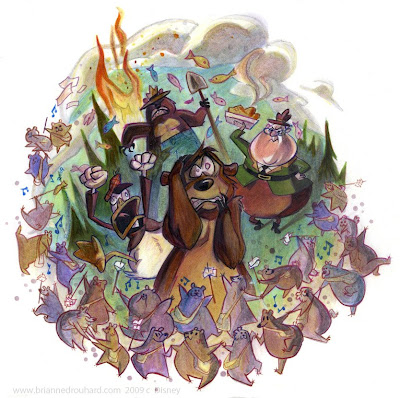 Today is my Mom's special birthday. She requested Humphrey the Bear. Here he is. I don't know why I didn't give Donald a gun, he should have one. :( Poor Humphrey, he is stupid and unlucky. Happy Birthday Mom! :) Hope Smokey the Bear doesn't come after you!

Humphrey is so bad at being a bear, even Smokey the Bear disapproves of him.
My mom told me a story about when she was a little girl. My grandparents, Uncle, and her, were driving to go camping at a national park (maybe Yellowstone? Don't remember). She was asleep in the back of the truck camper. A bear decided to jump onto the back of the camper and rode along for awhile. Luckily, the bear did not eat them. It was probably Humphrey. 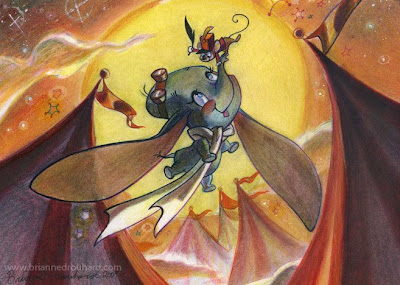 Dumb Dumbo drawing is for the Golden Age Show in Philidelphia this Friday.
Here is the info:
Golden Age of Comics and Animation gallery show
Brave New Worlds Comics,
this
Friday, July 3rd, at 6pm

I like Dumbo. It is one of my favorite movies. I was going to do something completely different for the show, but decided to do Dumbo instead. The piece I was going to turn in I ended up hating. It is below, along with sketches I did while hanging out with my brother during a long appointment weeks ago. There are other things too. It is a Disney Dumbo Dump. 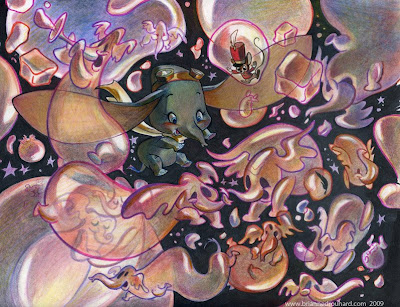 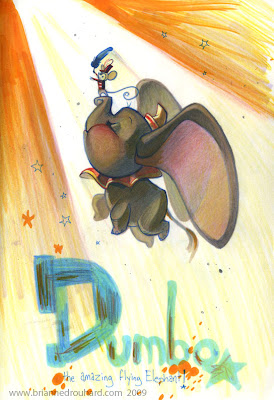 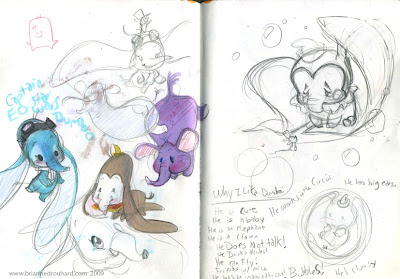 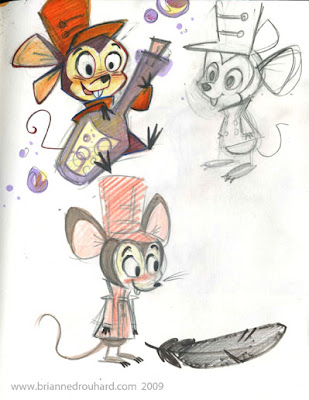 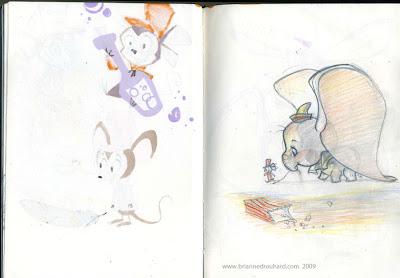 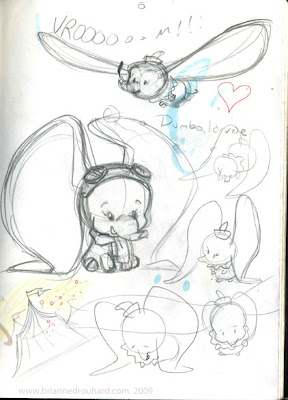 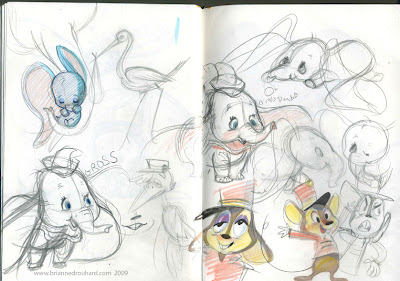 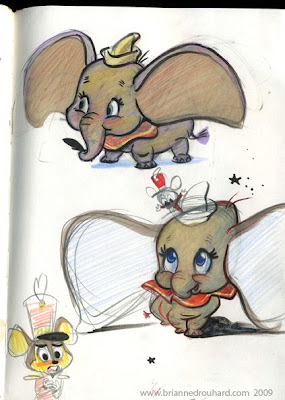 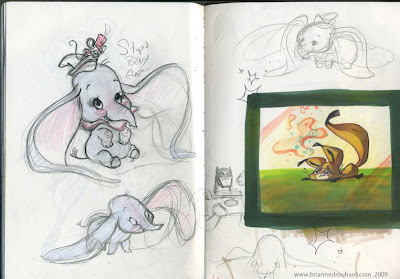 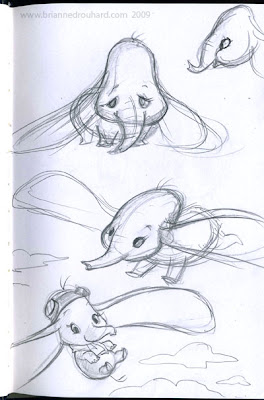 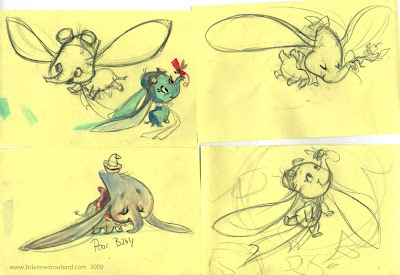 My friend's two and a half year old is obsessed with the Blue Fairy from Pinocchio, this is for her. 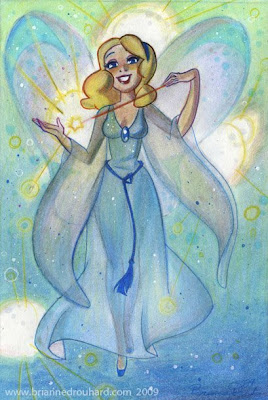 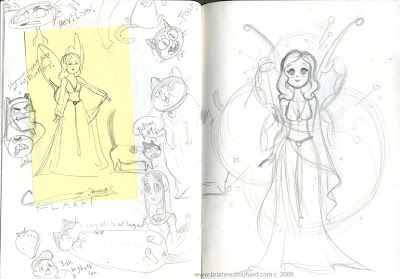 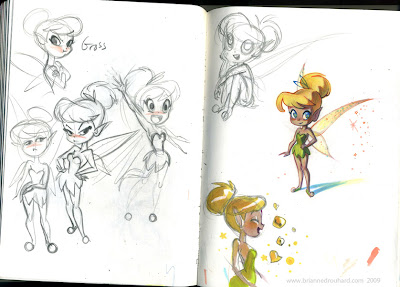 The End.
Email ThisBlogThis!Share to TwitterShare to FacebookShare to Pinterest
Posted by PotatoFarmGirl at 5:03 AM 17 Taters