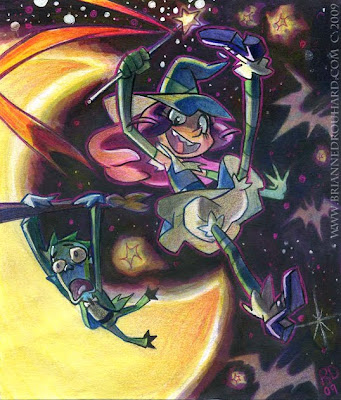 OMG! I drew something other than work and book stuff! Drawn on tiny post it, jpg is twice the original size. Actually, probably the only drawing made since August that wasn't for a deadline, book project, or wedding stuff. I need to make a new film so I can draw some new characters, instead of milking one dimensional Tricky and Gorf. OH! "Love Shine" recently got tagged by Sony on youtube. They haven't deleted yet, but they did stick an ad/direct link to iTunes/Amazon for buying the mp3. Which I'm perfectly fine with and encourage. Next couple of cartoons I make will hopefully have original music. In the meantime, the film is also still up on Vimeo.

So.....a couple of good friends are getting married on Halloween! Costumes, candy, cake, videogames, dancing, friends, it's going to be heaven, on Halloween! X3 I made artwork for their invites, but no posting here, because it is special and gothy!
In the meantime, here's some fanart from friends since I have nothing to show! LOLOLOLOLOLOLOLOLOLOLOLOL!!!!!!


FANARTZ from NON FLOUNDERZ!!!
These are by a nice fellow on deviantart calling himself Meowtwo. Here's his cool artsy stuff http://meowtwo.deviantart.com 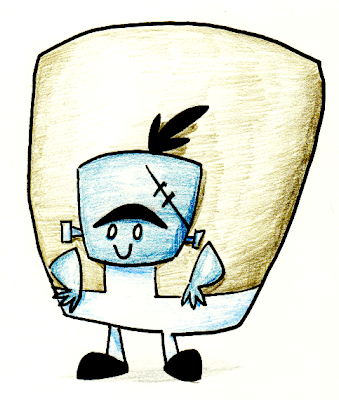 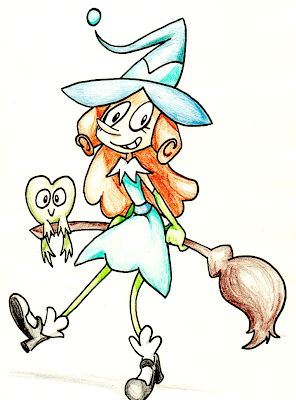 This was made by my friend Valerie, who is now married, to friend Roger. She will probably be mad at me now, but I don't think she ever comes here so she won't know anyway. She also needs to update her blog, but since she is an insane boarding/dictator/wife person, she has less time than I do. Look at her few cute stuffs at kia9000.blogspot.com 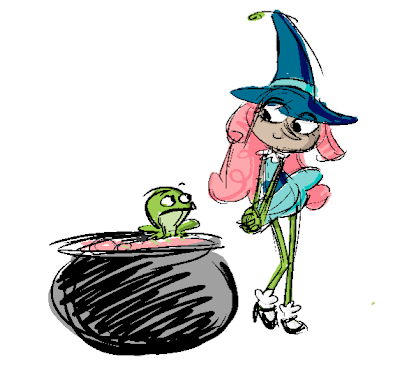 Current video/music favs:
Pomplamoosebuy thar moosics!!
SCARY HALLOWEEN VIDEO!!
I want to live here
This song has been on repeat this entire month. GIANT APPLE!! I think I drew them, don't remember. Poop. I'll be back around Christmas, if anyone still hangs around here, on the invisible monkey bars. Back to work. Bye.
Email ThisBlogThis!Share to TwitterShare to FacebookShare to Pinterest
Posted by PotatoFarmGirl at 12:42 AM 13 Taters