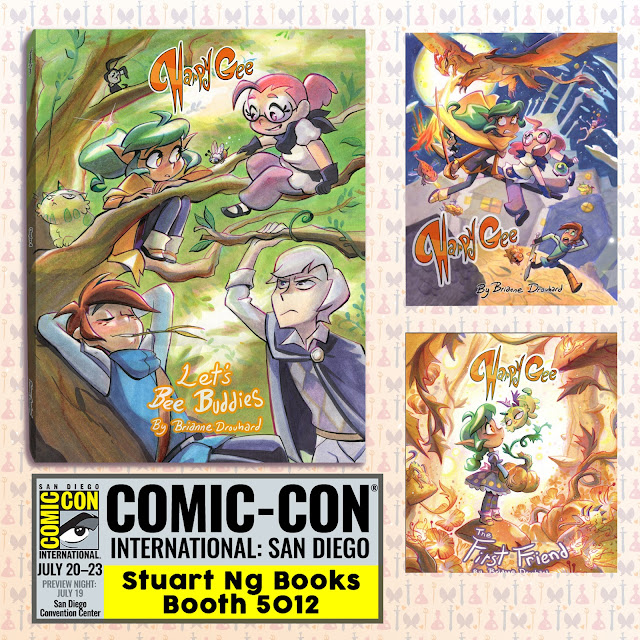 HI!  It's been awhile!
If you found my old blogger, I very rarely update it.

Here's a run down of what's been going on the past couple of years:

I've been working at Nickelodeon since 2014, drawing storyboards on Pig Goat Banana Cricket, and am currently a storyboard revisionist on the upcoming Glitch Techs tv show.

I decided to take a less busy job, because I'm also directing an animated short/pilot at Nickelodeon for something new.  Maybe I'll get to share it, maybe not, but it's been a great experience and the past year has been exciting and positive!

I also finished a five issue run drawing Mega Princess, written by Kelly Thompson.  The trade will be out this August, and it's a really adorable story about a sister solving the mystery of her missing brother, with the help of her talking pony!  You can order Mega Princess HERE

San Diego Comic Con is this week, I won't be there but my books will be!  Stuart Ng Books will have all THREE Harpy Gee books available, signed! If you want a book and can't make it to the show, you can order them HERE. StuartNgBooks.com

I'm still busy making the Harpy Gee webcomic, it's really a labor of love at this point.  Currently I'm about half way through drawing Chapter Four.  I never thought I'd be drawing it the past three years, and I've been over the moon being able to share the characters and their story.  The response has been positive, and I look forward to posting a new update every Monday.  Everyone has been so kind.

Last but not least, Skippy, my kitty and one of the first posts on this blog, passed away last January.  I miss him terribly.  I got him after moving into my first apartment and working my first tv animation job. He was a very good artist assistant and gave the best arm hugs. He was such a good kitty and friend.
Until next time Blogger.  💚

Email ThisBlogThis!Share to TwitterShare to FacebookShare to Pinterest
Posted by PotatoFarmGirl at 8:55 PM 12 Taters