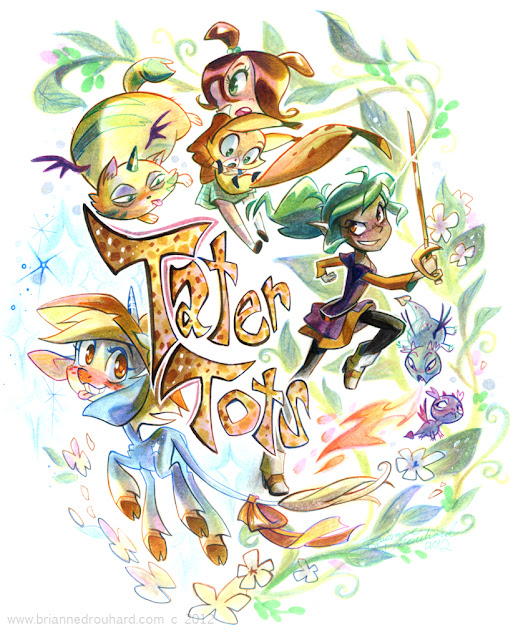 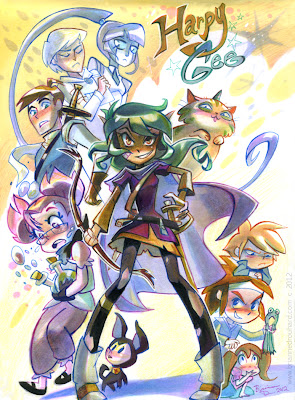 
Email ThisBlogThis!Share to TwitterShare to FacebookShare to Pinterest
Posted by PotatoFarmGirl at 9:23 PM

Harpy sounds amazing! I'm glad that you're still pushing forward with it on your own terms!

You're an inspiring lady, Brianne.

I'm hoping for the best - there's always room for girls with swords!

I can't wait to see Harpy - it sounds awesome! Sounds like it's something that will really appeal to the geeky fantasy/gamer girls. I hope the crowd for it jumps up and surprises anyone who dared to tell you she should be a boy based on the content. :P

Oh my goodness. I really want you to try pitching this again! I think it's adorable and I, a 19 year old, would definitely watch it. Elves and things are pretty popular right now as well as female characters. So please!! Please try again I would love to see this on tv. But, where can I read the comic? Unless it's not made already..

I wonder if this was the pitch you were talking about, last I met you? :]

Either way, this sounds like an amazingly magical (or not?) story! I would love to see the adventures of a young elf in a magical land. Especially if said elf cannot do magic.. I bet the possibilities are endless for funny, cute, sad, and interesting tales!!!!!

Wow thanks everyone! I'd been working on this so long, wasn't sure anymore if this idea had any worth. Very interested in trying a small comic over the summer. Something I would probably learn a lot from!
It would have been nice to have had Harpy animated, but que sera.

Chelene-
Thanks! I do often think what I would've wanted to watch when I was in high school, and that still influences my personal projects. School was not a favorite time for me, I couldn't wait to be done with it. The last thing I wanted to do when I got home was watch more drama involving it. I just survived the day, I'd rather watch Batman, Robin, Batgirl, or Sailor Moon, or Pirates of Dark Water. Probably why I played so many video games at the time too, it's a form of escape.
Maybe I've been sheltered and naive, but I was not expecting to run into close mindedness for having a female lead at some of the studios. Granted it's been a couple of years since I really tried, and it's looking positive out there with Korra and other amazing animation picking up the slack. I'm optimistic for the future, and with as many girls getting into animation, the studios are going to have to bend eventually. :)

Rocky-
Most likely it was Harpy. Her inability to use magic was going to be a huge focus, and I tend to like stories that can balance humor with risk. My story telling skills are not the strongest, and working on this pitch was an assignment I'd given myself to help me grow. It definitely has problems, but working on Harpy and Billie has helped me learn how to storyboard, design, and driven me to still animate. Even if those are just small snippets on my free time. It can be heartbreaking showing something so personal to be judged by others, but in the long run the experience was rewarding. I've met many wonderful and creative people! It's also led to some surprising and rewarding projects. <3

Aw, Brianne. That's too bad. I know how much work you put into it.

I think you should keep it in the back of your mind as a TV show. Be ready for an opportunity that falls into your lap from out of the blue, just in case.

Or (if you have tons of free time and get crazily ambitious), you could make 2 to 5 minute animated episodes, and promote the hell out of it. YouTube is an open frontier right now.

You might also show it on Amazon Studios, or other non-traditional venues. I think if you had one or two short episodes, a channel would seriously consider it. Your artwork is awesome. I can see a series like this taking off.

I'd like to collaborate with you on a casual game sometime. When I get my own studio up and running ...

Hi Brianne! We were at Comic Con today and bought your Billie the Unicorn book for my 6 year old daughter, Anna, who you signed it for. We read it tonight and she LOVED it! What a cute story, and the art was fantastic! She said this was definitely going on her "favorite books" shelf. I'm so glad we stopped by your booth today!

I am really happy I got to meet you during the con. You are a amazing person. Btw after I left I finally read the "Watch out for the marmots" comment. I laughed out loud during the panel. My boyfriend and I have been having fights about them being real. Why do people outside of Spokane not know about marmots T____T

I hope I get to see you again someday! If you come to a con in Western Washington let me know.

You and other people at the cons have inspired me to draw to do a comic no matter how little time I have.

Wow, Brianne, you must of had a helluva time trying to get your show off the ground, too bad it was unrealized. Keep up the good work.

P.S.
Your characters are awesome and fun in their own little way;You and me want no changes from those foolish execs. Who cares about what they say about Harpy Gee? I can tell you, in that respect, your audience is out there and what you're doin' is cute, funny, and appealing.

You can be free to make stuff for you, me, and all our friends.