Here is something based on a true story. It is really bad. It is not finished.
One time, a long time ago, I got my Dad to play ponies. It only happened once for a reason. He probably doesn't remember this. But I have never been able to look at ponies the same way ever again. Sorry if it doesn't make sense. It's not on youtube for a reason.

Barf!
I actually have some My Little Pony drawings. I should post them eventually. :(
Email ThisBlogThis!Share to TwitterShare to FacebookShare to Pinterest
Posted by PotatoFarmGirl at 4:12 AM 24 Taters 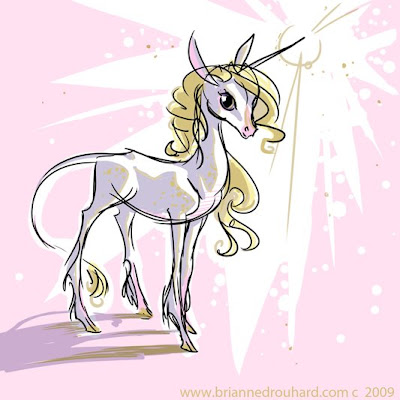 Brain is in two different places right now. Sketched this real quick on the Cintiq. I am not dead, just insanely busy, brains melting out of my ears.
Oh yeah. I've been getting alot of emails (more like spambots, or form letters) asking me to put ads up on my blog to sell things like Ugg boots, art contests that seem a little odd, and other things I am personally not interested in. I link to friends and things I want to share with others, that's all.
Email ThisBlogThis!Share to TwitterShare to FacebookShare to Pinterest
Posted by PotatoFarmGirl at 12:48 AM 10 Taters 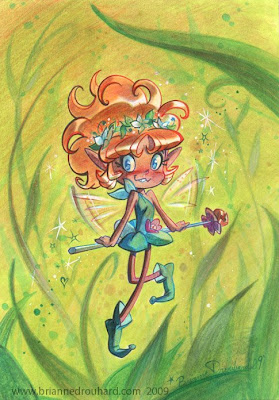 Anybody remember her? I know Miss Mindy does. We had that discussion a long time ago. Most people don't remember her. I've wanted to draw her for awhile, but I finally did (not as much time on these as I would've liked.) The above image is for The Autumn Society.
Here is the info:
80's Pop Show
@ Brave New Worlds
45 North 2nd Street
Old City, Philadelphia
Friday, June 5th, 6pm
www.bravenewworldscomics.com

Anyway, Herself the Elf was a line of toys that came out in the early 80's, probably to cash in on the popularity of Strawberry Shortcake, Rainbow Brite, Rose Petal's Place, etc. They were made by Mattel/American Greetings. The dolls must have done horribly because only two of my friends remember them, vaguely, and they are pretty easy to find on ebay. I used to play with them in the dirt, and thought they were neat with their spindly legs, weird hair, and bells on their clothing. They also had little plastic pointed shoes! There was a book that came out, I have/had it somewhere. I may have left it on accident on my last job at CN, so if anyone happens to see it, I'd be really happy to get it back. Hopefully it's just laying in an unopened box somewhere in my apartment. The book consists of screenshots of the pilot Nelvana made, and apparently was a mail away. 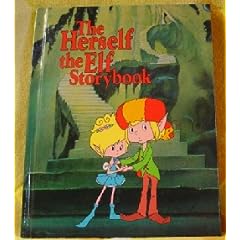 Here are some horrible cintiq doodles. I did some on paper, but am too lazy to scan. 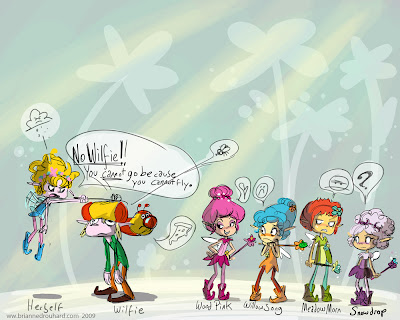 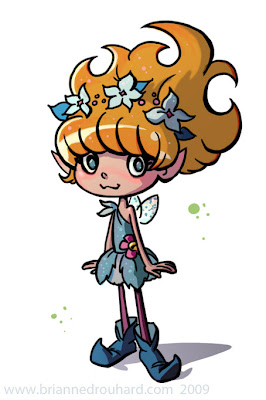 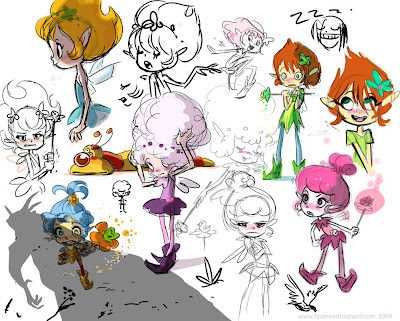 The dolls were sooooo popular in the 80's, I was able to get one still in box for super cheap on ebay. She wasn't the only one for sale. She went to dinner with me.... 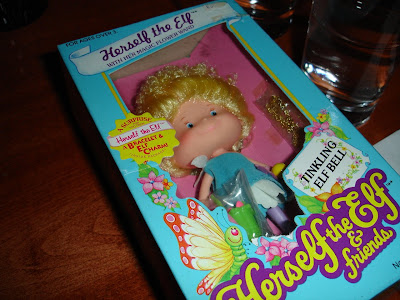 My friends were not impressed. At all. This is how impressed they were: 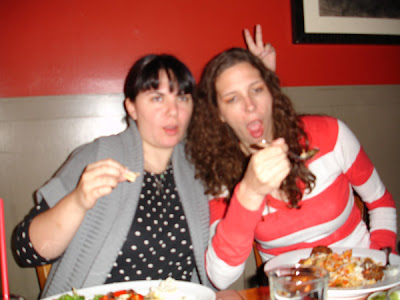 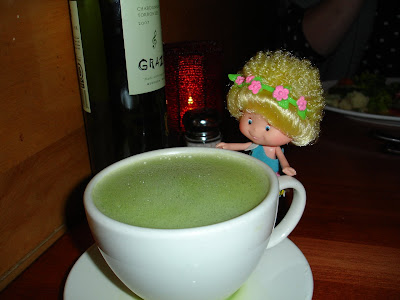 If this whole post isn't creepy enough, I was actually on a panel about animation production. Like I would know anything about that. Luckily, Marty, Derrick, and Matt spoke most of the time, since they know that stuff pretty well. Thank you everyone I met at Botcon! Everyone was super nice!
Email ThisBlogThis!Share to TwitterShare to FacebookShare to Pinterest
Posted by PotatoFarmGirl at 1:25 AM 24 Taters